For over a week now, the folks of the San Giacomo dell’Orio neighborhood in Venice have been rocking and rolling. The parish puts on an annual party in their big campo, with picnic tables under  the trees and food booths. Every night there’s a different band, and night after night the cooks are still so energetic that they stop barbecuing so they can bang their metal spatulas on the stove hood in time to the music. Every night the same dude in blinking blue sunglasses roves the crowd and sells such sunglasses to others. You can get a plastic cup of wine for one euro. It’s the place to be. 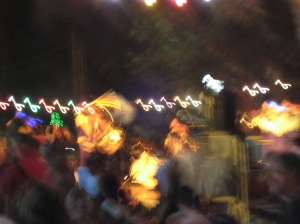 I’ve been dropping by many nights after my Italian class ends. One night it was Sauro’s Band, doing some jazz hits and a big variety of stuff, as long as it had many many horns in it. That night the rain went from a being a few kisses to a bit of a nuisance, so I cut out and headed home to make some dinner.

But the next night i returned and arrived before the band started. I got a chance to practice my Italian with the guy next to me as I asked what time the band would start up. And once they did, I stood there thinking that the dreadlocked singer looked awfully familiar. Then he began singing and I turned to my neighbor and said, “But he sounds like the guy from Pittura Freska!” Pittura Freska is this Venetian band from a couple decades ago that reenergized the city with young people singing in Venetian dialect. I’m not sure what the older Venetians thought of the band, but lots of people felt like they brought some new life to an aging city.

My friendly neighbor explained that yes, this was the latest incarnation of the band. They played some of their songs from previous incarnations, plus stuff I wasn’t familiar with. Like the previous night’s band, the horn section stole the show. The rain was kissing us again, but that wasn’t enough to stop me–though finally my hunger got the best of me and I headed home (though not before stopping at the merchandise table to buy a pair of underwear with the band’s logo on it).

The next night was a Beatles cover band, but I just passed through. Tonight, though, was salsa, Venetian style, with the band Batisto Coco.This week we studied the future tense in Italian class, and I realized that the band was singing, “Salsa, salserai,” meaning “Dance, you will dance!” (Did I spell that right, teacher?) I drank my one euro cup of wine and danced along the sidelines, enjoying watching the other couples wiggle their hips and spin each other around. A dog in a flashing red collar came by and sniffed the same tree four times, and a group of 8 year olds kicked a soccer ball against the church wall. The blinky blue sunglass guy sold more blinky blue sunglasses.

Tonight is the last night, with a TOMBOLA that everyone seems to be very excited about. It’s basically the church raffle with things like plastic toy trucks and flower pots. Maybe there’s something more that I didn’t see and don’t know about, or maybe the parish of San Giacomo is just a really cool neighborhood of folks who get excited by simply living.