Posted on October 20, 2015 by seductivevenice

Tonight in France on France 2 aired a new documentary on Casanova, created by Jean-Edouard Choppin. Here is a link to the announcement and previews:

It’s part of a series called Secrets d’Histoire. Jean-Edouard Choppin contacted me a year and a half ago because he had come across my book Seductive Venice: In Casanova’s Footsteps, and he had questions about Casanova locations in Venice, where he would be filming. Thus began a correspondence that developed into a friendship, though we have yet to meet face to face.

Jean-Edouard emailed me today to tell me about tonight’s airing of the documentary. And guess what? I’m mentioned in the credits! Woohoo! Here’s a screen shot: 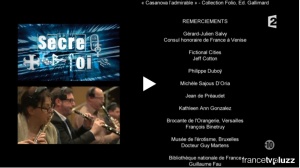 The documentary is in French, so unfortunately I can’t understand the text, though it’s wonderful to see Casanova’s life played out in locations. Choppin includes lots of movie clips, recreations, commentators, and gorgeous shots of actual Casanova locations. Check it out! (I was able to watch it through the site hola.org, which lets you change your viewing location and pretend you’re in France.) 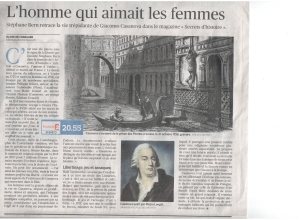 I’m always pleasantly shocked when my writing, which was born from my love of Venice, leads to introductions to wonderful people and other creative projects. What a cool consequence to find my work used in a nationally-aired documentary! Thanks, Jean-Edouard!