The British traveler (and one-time court jester) Thomas Coryat is often credited as taking the first Grand Tour of Europe (though he certainly didn’t know it at the time!). In 1608 he traversed Europe, mostly on foot, and spent some considerable time in Venice. I’m tickled by his observations on gondoliers from Volume 1  of Coryat’s Crudities, the book he published upon his return.

Don’t let the spelling differences distract you (thought you might find them diverting!)

“There are in Venice thirteen ferries or passages, which Ferries they commonly call Traghetti, where passengers may be transported in a Gondola to what place of the City they will. Of which thirteene, one is under this Rialto bridge. But the boatmen that attend at this ferry are the most vicious and licentious varlets about all the City. For if a stranger entereth into one of their Gondolas, and doth not presently tell them whither he will goe, they will incontinently carry him of their owne accord to a religious vicious house forsooth, where his plumes shall be well pulled before he commeth forth againe. …” 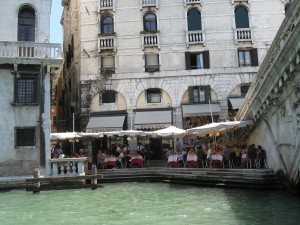 Now the site of a restaurant, there used to be a traghetto crossing here at the base of the Rialto Bridge.

This particular traghetto crossing was well-known as one way to reach the red-light district, or Castelletto, on the fish market side of the Rialto area. So it’s not too hard to believe that the gondoliers might be used to the rougher clientele who visited the brothels there. The ferry coin used to pay for the passage had a hole in its center and was known as a buso, which means hole. Historians Alberto Toso Fei and Shaul Bassi recount that this little nook was referred to as a hole; in fact, the restaurant that is still there is called Ristorante Al Buso (Restaurant at the Hole). They also add that that the, ahem, hole in question may refer to the prostitutes that passengers were crossing to meet.

Coryat continues in his description:

“Therefore I counsaile all my countrimen whatsoever, Gentlemen or others that determine hereafter to see Venice, to beware of the Circaean cups, and the Syrens melody, I meane these seducing and tempting Gondoleers of the Rialto bridge, least they afterward cry Peccavi when it is to late. For facilis descensus Averni, Noctes atque dies patet atri janua Ditis.”

Translation of that Latin bit, according to Google translate: “For the descent to Avernus, this the gate of nights and days.” Is Coryat referring to the trip to the red-light district, filled with sirens? Or the rough and tumble gondoliers one must face like some sort of pack of Cerberuses? Or the Cicaean cups of wine that will addle one’ brains? Actually, Avernus is a volcanic crater west of Naples, so maybe he’s warning about the lava flows….

Here’s what these “seducing and tempting Gondoliers” would have looked like around 1500 (from Carpaccio’s painting “The Miracle of the True Cross at the Rialto Bridge.”) A bunch of tempting hotties, right? 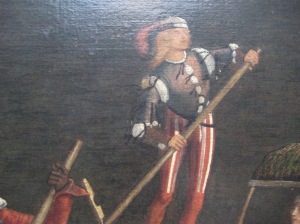 So what are these gondoliers up to? Coryat claims that “…if the passenger commandeth them to carry him to any place where his serious and urgent businesse lies, which he cannot but follow without some prejudice unto him, these impious miscreants will either strive to carry him away, maugre his hart, to some irreligious place whether he would not goe, or at the least tempt him with their diabolicall perswasions.”

“Maugre his hart”–in spite of his heart. I’m guessing you can figure out the definition of “diabolicall perswasions” without having to look up these words, though maybe we’ll never know what sorts of diabolical things these gondoliers really got themselves and their passengers into. I wonder if the gondoliers received a commission for the clients they ferried to the women of the Castelletto?

Anyone wearing those pants must certainly be up to no good!