Yesterday afternoon I headed across the Redentore bridge once again in order to watch the regattas. The races included the giovanissimi (the young men) in the pupparino, the men in the pupparino, and the gondola with two rowers. Here’s what a a pupparino looks like: 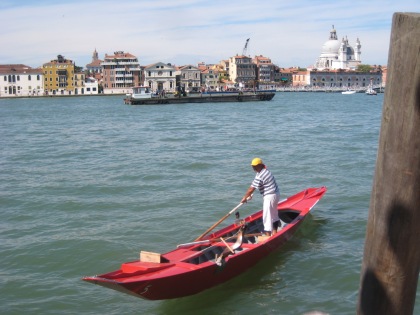 The first two races went off smoothly. In the giovanissimi race, first place went to the team in the bianco boat, Giacomo Marangon and Simone Vecchiato. The team in the verde boat got off to a  slow start but made a magnificent comeback and took fourth place. 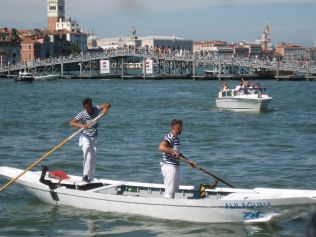 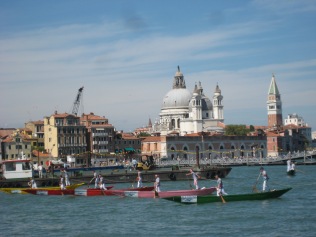 For the men’s pupparini race, first place went to team rosso, Alberto Busetto and Michele Vianello. In the line up of racers, there were 4 Busettos and 5 Vianellos, so you can see that these are serious racing families.

In between races, the mayor showed up. When he was announced, no one clapped. I guess he’s not so popular. The police had nifty jet skis to help keep order. 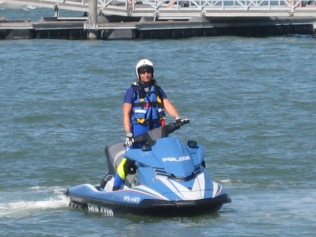 The final race of the day was between the gondolas. Last year, Giampaolo D’Este set the record with 21 wins, and a friend of mine told me that this year he decided not to race so he could spend more time with his family. That left the field open to rivals and fast rowers, particularly the teams of Rudi and Igor Vignotto against Roberto and Renato Busetto. The race started at the crack of the gun, and off they zoomed to the end of the Giudecca island.

When they returned, though, lots of controversy ensued. There was lots of yelling and gesticulating, red faces and loud words. The winners were quickly announced and everyone dispersed faster than you can say “Redentore.” I asked around and also checked the newspapers today, but I couldn’t find out all the details of what happened. But here’s what I do know:

The winners, without a doubt, were team rosa, Rudi and Igor Vignotto. Here they get their red flag for first place. 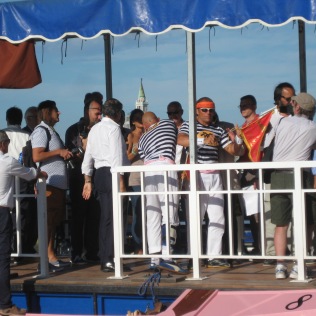 But where was the Busetto team? Their viola gondola arrived, with two very angry rowers. Apparently the forcola broke partway through the race and they were unable to finish. The boats belong to the commun (I think) and are randomly assigned to the teams, so it was not the fault of the Busettos. No wonder they were angry, but their shouting marred the victory for the Vignottos.

The marron boat didn’t finish either, though I don’t know why. The celeste boat didn’t race and was replaced by the riserva boat, which is half green half red. At the finish line, riserva pulled in front of canarin (yellow) to take fourth place, but then when winners were announced, the fourth flag went to canarin! What had happened? Apparently riserva had not properly rowed around the buoy and was disqualified. Lots more angry shouting ensued, from the racers as well as the crowd. What a mess! The event ended on a sour note, and everyone dispersed quickly, probably a good thing before any fisticuffs broke out.

But a hearty congratulations to Rudi and Igor Vignotto for a race well rowed!