Posted on August 18, 2016 by seductivevenice

Spying on History with Marco Polo

Manuel’s gallery is on Giudecca, and I stopped by a couple times this summer. Though most of the Casanova tiles are put away in storage until their next showing, a few are still on display.

I took home with me a blank tile and wondered what to do with it. I finally decided to find stamps from places Polo had visited. I settled on Italy, Armenia, Afghanistan, China, and Mongolia. Thus ensued many eBay auctions and vigils. But finally I came up with something: 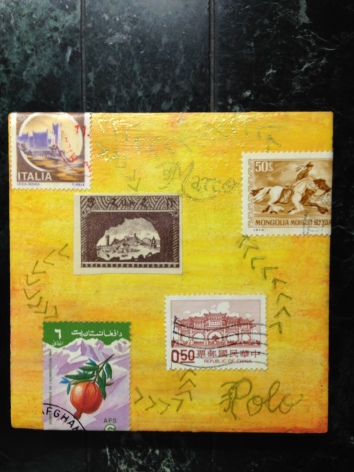 My friend Carol has generously offered to deliver the tile when she heads to Venice next week. Being an artist herself, she hopefully won’t be embarrassed to be seen with my amateur art. But I’m happy to think that my little offering will live with the offerings of a thousand other Marco Polo fans and explorers. Manuel Carrión hopes that these projects will introduce these personages to a wider audience. It seems to be working!

I met up with Manuel before I went to watch the Redentore fireworks. (You can see that I wanted to be as sparkly as the sky.) Here were the tiles already on display a month ago. If you watched the video at the top of this post, you’ll see that the number of tiles is growing rapidly! 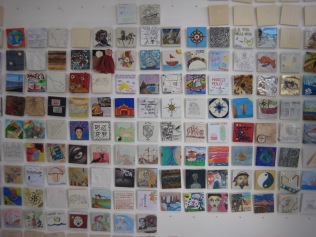 Who will Manuel commemorate next? Rumor has it that Peggy Guggenheim is at the top of the list.

And I’ll leave you with this TV ad. When I was a kid, in the swimming pool we’d play “Marco Polo” where one person had to keep her eyes closed and call out “Marco.” The others in the pool answered “Polo,” and the first kid tried to find them based on the sound of their voice. I wonder if Italians play this game and would understand the joke in this ad? And I wonder if Americans watching this ad understand what Marco Polo is saying? I know it just makes me giggle.

2 Responses to Spying with Marco Polo