Want a sneak peek into the Venice Biennale? New York Times reporter Robin Pogrebin sent out her video showing various pavilions in both the Giardini and Arsenale parts of the exhibit, as well as some events in other parts of the city. She talks to American artist Mark Bradford about his installation. Grottoes as art! Then she walks through the award winning German pavilion. But be forewarned! If you’re one of those people who doesn’t like to see something before you see it in person, then don’t watch this! But without giving too much away, I have to say that the German pavilion reminds me of a piece they did many years ago that had people standing in a room repeating the same phrase over and over. People as art! Anyone else remember that one? I tried googling it but didn’t get a hit. It was from maybe 1997 or 1999, I think.

Robin Pogrebin also takes you into Palazzo Grassi to see the Damien Hirst exhibit, and you get to hob nob with the suit and gown crowd as they sip their prosecco on Giudecca. There’s also a controversial interactive piece where refugees make lamps. Refugees as art? Umm, I’ll withhold judgment until I see it myself, though this raises some red flags for me. I look forward to the Austrian piece, also interactive, where my butt can apparently be part of the art. Arse as art!

For a walk down memory lane, here are a few pics from the Biennale two years ago.

Me fixing my shoe in front of a wall of suitcases, uh, I mean, art 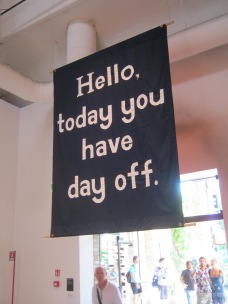 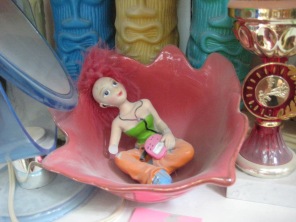 (Thanks to Karen for the NYT link!)