Posted on August 10, 2017 by seductivevenice

The altar at the Pietá

On this day in 1782, a great violinist died. She was Anna Maria dal Violin, who was orphaned, left at the Ospedale Santa Maria della Pietá in the scaffetta, a revolving door where babies could be left anonymously. She showed an early proficiency as a musician and was then raised and trained at the Pietá. While in Venice this summer, the nice guy at the church’s entrance desk allowed me in to make this video about her:

The Pietá had a practice of choosing a first name for the baby, but the surname came from the instrument she was most proficient in. Besides Violin, records also show her surname as Cello, Mandolin, Oboe, Luta, and Theorbo, and she played the harpsichord and viola d’amore as well. But violin was Anna Maria’s specialty, and Antonio Vivaldi trained her personally, also writing 37 violin concertos just for her. In the video, I mention that these pieces were in a partbook that is now housed at the Fondo Esposti of the Conservatorio di Musica “Benedetto Marcello” at Campo Santo Stefano.

But I need to make a small correction to this video. I said that the original building where Anna Maria and the other girls lived and played music was next door at what is now the Hotel Monaco, but that is incorrect. It’s the Hotel Metropole, whose bar still has the scaffetta in the wall. (The Hotel Monaco, on the Grand Canal further down by Harry’s Bar, was the former site of the Ridotto where Casanova gambled. I have a separate video for that site.) 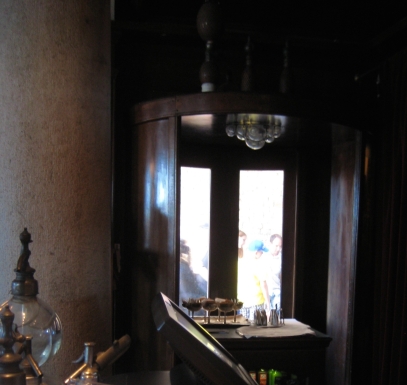 Scaffetta from inside the bar of Hotel Metropole

Here’s a paragraph about Anna Maria, from my book A Beautiful Woman in Venice, that puts into context the importance of Anna Maria and the other girls and women who lived at the Pietá:

“In a city where women had little power, minimal choices, and virtually no voice, the Piéta provided an extraordinary exception. Yes, it might be faulted for its strictures; from the outside, it appeared to be a veritable prison, all under the control of men. Yet Signora Lucieta Organo, Signora Pelegrina Oboe, Signora Prudenza Violin, and especially Signora Anna Maria dal Violin, among others, showed that women were worthy of an education, that women could be just as talented as men, that women could organize and operate a highly successful large institution, that women could contribute things of great value to their church and society. As Jane Baldauf-Berdes explains, “Women excelled as bearers of a music-centered tradition unique to the Venetian civilization.” Due to her close association with Antonio Vivaldi, Anna Maria also became one of the most “important agent[s] in the transmission of Vivaldi’s music and performing style,” and a great contributor to musical development and history.” 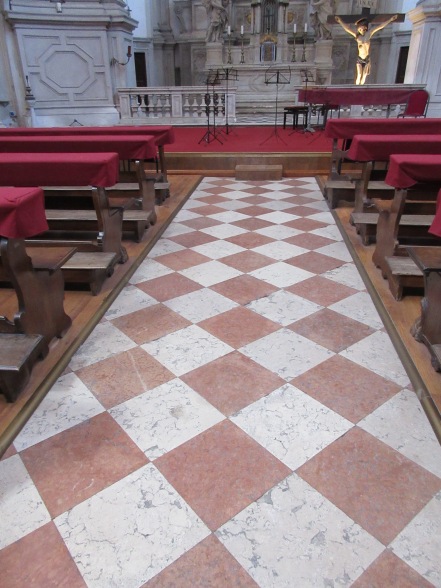 The last resting place for the women at the Pietá was beneath the marble floor of this church.

So enjoy this video, a little glimpse into Venetian women’s contributions, and honor Anna Maria today by viewing her last resting place on this day, 235 years after her death. Here’s a little sample of the music Vivaldi wrote for her while you toast her memory.

Concerto in B Minor for Anna Maria dal Violin 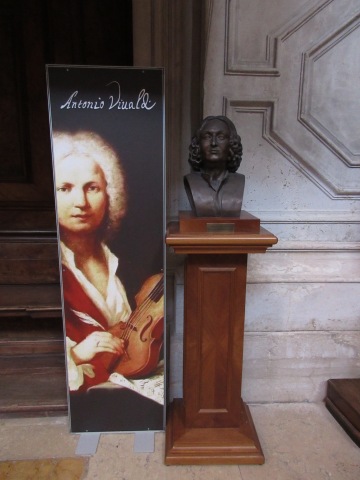 Vivaldi is memorialized at the Pietá, but I hope more people will honor the musicians who lived and played there as well