Posted on July 5, 2018 by seductivevenice 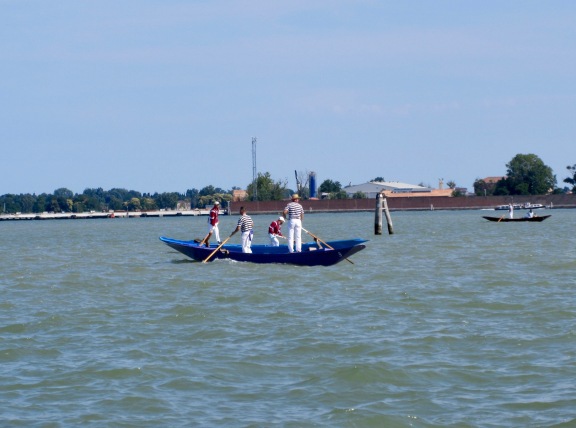 Boats line up near Murano for the start of the race

The sun was shining, the waves were choppy, and the boats were colorful. B, my indefatigable regatta partner every summer, joined me again for the boat races at SS Giovanni e Paolo on Sunday, June 24. We had been out all day exploring the northern lagoon and saw the pupperini lining up near Murano, where the race commences. These are boats smaller and flatter than gondolas, and today rowed by a team of two men.

We arrived to Campo SS Giovanni e Paolo in time to see the other set of racers, the giovani or young men, lining up in the canal. They nosed their racing gondolas in facing the church, looking like a rainbow as they waited for the priest to bless their boats. They all wore white pants and shirts, with either a sash at their waist or headband that matched their boat color.

A rainbow of gondolas 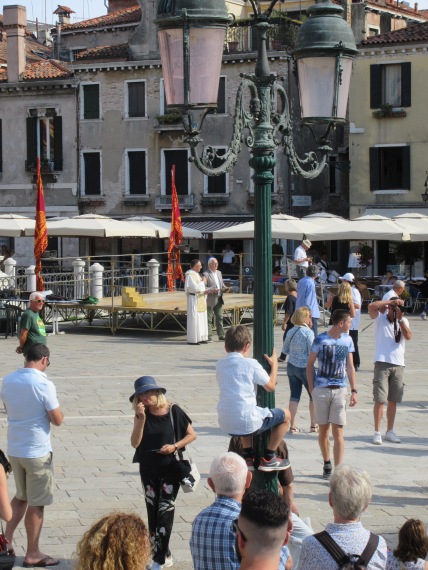 The parish priest readies to bless the boats

I overheard nearby conversation: “Look at that one in the tight pants.” “Yes, maybe he’ll fall in the water.” “I wonder if his pants restrict his racing speed?” Isn’t it awful how women are always objectifying men, focusing only on their bodies instead of recognizing their other talents?

Some racers prefer to be barefoot

We walked back up to Fondamente Nove to watch the race. They came from Murano, past the cemetery island of San Michele to Fondamente Nove, east to the Arsenale, and doubling back to finish at the hospital at the Rio dei Mendicanti. A little table was set up there, with the frame and piece of wire running vertically down it for the judge to decide who crossed the line first. Inexplicably, the race announcer sat at a table back in the campo, getting race updates over his headphones and announcing the racers’ status over the loudspeaker. The stage was set up there, along with the flags for the winners.

Winners flags by the statue of Colleonni

The judge’s table on the fondamenta

Most of the folks watching the race were gathered on the Ponte dei Mendicanti. I heard a lot of Venetian being spoken. It seemed to be families and friends of the racers, primarily. A guy came around and handed us programs, and I recognized some of the names of families who have racers: Busetto, Vianello, Vignotto. I saw a family name belonging to my friends, brothers who are gondoliers, and wondered if the teenage son might be racing that day. (Turns out, whoever he was, he was the alternate and didn’t race anyway.) 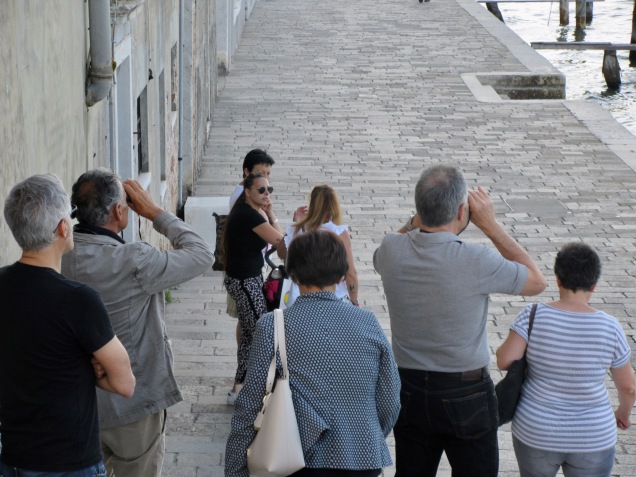 After enough time had elapsed that B and her sister Laura and I had had our gelato, here came the racers striving towards the finish. For the men’s pupperini race, first place went to Guglielmo Marzi and Mauro Cecilieti in the viola boat, second to Alberto Busetto and Ennio Busetto in bianco, and third to Giacomo Marangon and Riccardo Caenazzo in rosa. At least I think that’s accurate—I get caught up in taking pictures of the racers raising their oars overhead in victory as we all yell “Bravo!”

Near me, a white-haired man in yellow slacks waved his cane at the winners. “Bravo, Mauro! Bravo!” he yelled. B and I wanted to follow Papa to see father and son reunite at the campo when Mauro disembarked.

But there was still the gondola race of the giovani. The rainbow had earlier headed to the starting line at Murano, and a little later we watched them striving across the water between the bricole wooden pilings and veer towards the western edge of Fondamente Nove. A flotilla of motorboats followed along, full of families cheering and police or coast guard keeping order and directing the vaporetti to to stay out of the way. Soon they passed us, left to right, and disappeared towards the Arsenale. As we waited, a young woman came up and began asking questions of me and the older man in the blue shirt next to me. I did my best to translate. Turns out this loquacious and amicable man is a rowing teacher and had taught most of these young racers. I felt proud just standing next to him—who knows why, as I had nothing to do with any of it, but I was basking in the tradition and culture that permeated the moment.

Verde passing us as he heads towards the Arsenale

After making a U-turn at the Arsenale, finally here they came towards the finish line. Matteo Zaniol in verde was far in front and won easily, with Nicoló Trabuio in celeste taking second and Mattia Vignotto in marron in third. 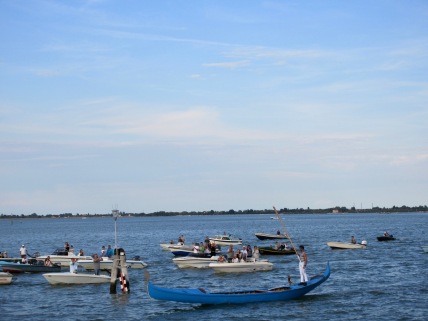 Family and friends all around us cheered, but none quite so loud as the proud father next to me. He waved and called to his son. Then as celeste slid his boat under our bridge, he looked up and said, “Ciao, Papà” with a sweet smile.