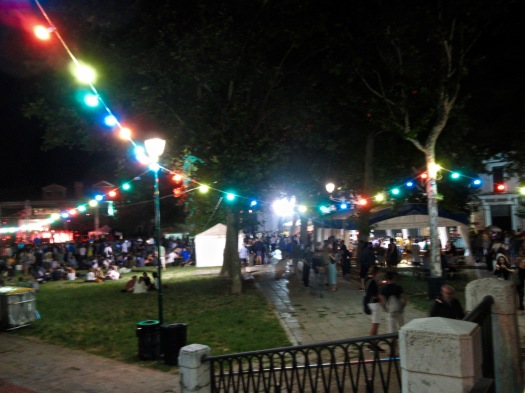 Always strings of lights. Blue and green and yellow and red and orange. They announce the sagra before you even cross the bridge into San Pietro in Castello–or San Piero, as it’s said in dialect.

Lorenzo, Giorgia, and Federica cross the bridge before us as we walk towards San Pietro

The church tower of San Pietro as we approach the island

This was the biggest sagra I had been to yet. Numerous tents shaded countless picnic tables where people already gathered with their food and friends. B and I wasted no time getting a couple piadini, those sandwiches that remind me of the Italian version of a Mexican quesadilla, ours filled with mozzarella and fresh tomato slices. In line to pay, a little good stood next to us, clutching the string to her inflated white unicorn with the rainbow horn, the balloon as big as her.

Lorenzo grabbed three beers for himself, Federica, and Giorgia to start on while they waited in the other food line for mixed fry-fry and polenta, which would end up taking nearly two hours to arrive. By then B and I had found a table, finished our piadini, and saved seats for the others while they waited. 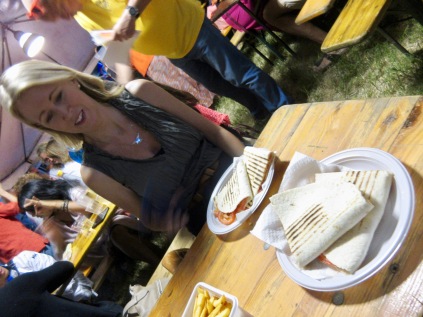 While the stage San Giovanni in Bragora was a decent size, as well as the usual ones at San Giacomo dell’Orio and Malamocco, this sagra at San Pietro was supersized, with a canopy, stacks of speakers, and a full light show. Through the crowds and between the tents we could see Vocal Skyline singing while gesturing along with their lyrics. Later we went closer to check them out and I thought of past episodes of Glee.

But as usual, I always love checking out the mercatino, the little marketplace of homemade jams, discarded books, knitting, and the Murano glass pieces that aunty has cleaned out of her cupboard to raise money for charity. I asked B, “Do you still have the lopsided little milk pitcher you bought at Mazzorbo a couple years ago?”

“Yes, of course! I still love it!” she said, her face breaking into a smile. I still have the gondola-shaped penknife, the black costume jewelry necklace, the lion-shaped doorplate. I’m a sucker for these tchotchkes, though I didn’t actually find something to buy at San Pietro.

The full moon was rising over the rooftops, brightening the few clouds, and silvering the canal below the bridge we crossed. I would miss the next three nights of this sagra, but at least I got to party with the San Pietro neighborhood.

2 Responses to Strings of Lights