Posted on October 18, 2018 by seductivevenice

Do you ever wish you could meet people from the past? Evelina van Millingen Pisani is one of those intriguing characters I’d like to share a cup of tea with.

I got to know her in the book Evelina: A Victorian Heroine in Venice by Judith Harris, a writer based in Rome. The book opens with a flood about to engulf the land Evelina is protecting, the inheritance from her late husband, Count Almorò III Pisani.

But then we flashback to Evelina’s chaotic heritage; for example, her father, a British doctor, was accused of having murdered Lord Byron. Evelina’s French mother Marionca was both victim and perpetrator in her own turmoil, it seems: Harris tells us of her manipulations, affairs, and alarming reactions to events, but in the face of her husband’s neglect as well as machinations against her by other family members, some of her behavior seems understandable. Wherever the truth lies, Evelina escaped this chaos and found refuge in her adoring husband, a Venetian Count from the noble Pisani family.

I won’t try to summarize the whole story here–you can find that on Amazon or, better yet, you can read the book yourself! Harris meticulously digs through letters, news reports, and other historical documents to piece together this family’s curious history. Instead, I’ll share some of the highlights in the book for me, a more personal reaction rather than a book review.

One thing that drew me to the book was Evelina’s connection to the Villa Pisani in Stra, where she lived with her husband. Designing the garden was a balm to her, and her home became a refuge where she could invite friends and escape the heat and humidity of Venice. I visited the villa some years ago, reveling in the gardens, particularly the hedge maze and the orangery, Victorian garden features that I admire. I’m happy to report that my partner RJ and I made it through the maze to the center building. 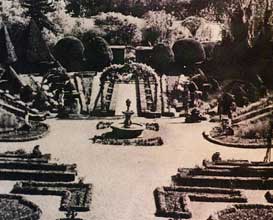 The gardens that Evelina created

Evelina also surrounded herself with other interesting folks from her era, including a close relationship with Margaret Symonds, daughter to writer John Addington Symonds, who visited her often at Villa Pisani. (Personally I loved Symonds’ biography on Frederick Rolfe, the English author who is buried in Venice; Symonds’ writing depicts this eccentric as both exasperating and sympathetic, a difficult feat.) Henry James was another admirer of Evelina’s pluck, determination, and management skills, and the Curtises, Daniel and Ariana, were her neighbors, with their constant flow of artists and writers visiting Palazzo Barbaro. Moreover, Isabella Stewart Gardner was also a close friend–and of particular interest to me since last summer I finally visited her former-home-now-museum in Boston, which is modeled after Palazzo Barbaro.

So you can see that books can inform us and entertain us and delight us, and when they intersect with the things we already know and love, that’s a bonus. In Evelina I’m sure you’ll find your own bonus, whether it’s reading about Lord Byron’s death, or life in Constantinople, or growing up in Rome. Have fun finding out!

Judith Harris also contributed to First Spritz Is Free: Confessions of Venice Addicts, with her chapter “Venice Between Poetry and Pragmatism.” Here’s an excerpt, where she tells more about the Curtises’ role in Venetian society:

“After the Napoleonic era, Venice increasingly attracted artists, writers, the ultra-cultivated and the merely wealthy from all over Europe as well as the United States. Especially the Americans found Venice a soothing instance of decadence and pleasing contrast from the manufacturing cities of the US Northeast, like Boston. Finding it meant buying it—and the great double Palazzo Barbaro on the Grand Canal passed into the hands of the rich Bostonian merchant banker Daniel Curtis and his wife, who became the doyennes of Venetian society.

At that time the Venetians themselves were in deep trouble. Many were also in debt, for the Austrian rulers (ousted only in 1866) neglected the Venetian ports in preference to Trieste. At the same time the manufacturing revolution sweeping Northern Italy bypassed Venice for the better-connected Milan and Turin. So many jobs were lost that the Venetian population declined by one quarter in just a dozen years.

The one hundred or so aristocratic Venetian families sold off their palazzi, paintings, and possessions, one by one. The Curtises, who first rented the fifteenth century Palazzo Barbaro in 1880, purchased it in 1885 for the equivalent of around $16,000. (In 2017 its top two floors were sold for $2 million.) The Curtises found the palazzo(in reality a double palazzo) in terrible condition, and painstakingly and expensively restored it to its former glory. The interior of its piano nobile was painted by John Singer Sargent, who happened to be a Curtis cousin.” 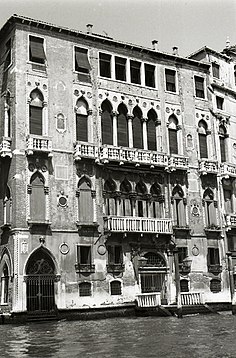