Last summer I had the great good fortune to be led around Rome by my friend, Casanovist Adriano Contini. Today’s post is the first in a series showing you places in Rome that Adriano took me to, places connected to Giacomo Casanova’s times in Rome. The research on these locations was done by a number of people, primarily Furio Luccichenti and Adriano himself, and much of it is unpublished.

The Spanish Embassy today, looking pretty much like Casanova would have seen it

Site #1: The Spanish Embassy at the Holy See, at Piazza di Spagna 57.

In his History of My Life, Casanova writes that he arrived in Rome and the next day visited Cardinal Acquaviva, considered the most powerful person in Rome after the Pope. They met at the Villa Negroni, which no longer exists, on October 1, 1743. (Casanova also tells us that this was the first day he ever shaved his beard “I felt that I must begin to renounce certain privileges of adolescence,” he writes.) The Cardinal inspects Casanova and finds him worthy of his service, telling Casanova to go the next day to the Palazzo di Spagna, now the Spanish Embassy (and in fact owned by the King of Spain to house his ambassadors).

At the Palazzo di Spagna the next day, Casanova met with Abate Gama, a Portuguese man in the Cardinal’s employ and that “his handsome countenance expressed frankness, humor, and intelligence.” The Abate had already been instructed to sign over a three month advance in pay to Casanova for his services to the Cardinal, and in fact an apartment had already been prepared for Casanova up on the fourth floor. The Cardinal had also counseled Casanova to learn French as soon as possible, so the Abate told Casanova about the teacher he should see who was housed just across the square. (A forthcoming blog post will show you that location!) 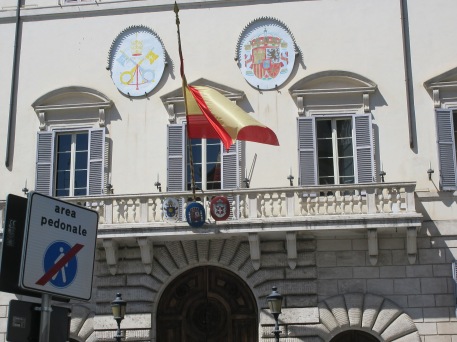 The Spanish flag flies now, as it may have in C’s day.

Casanova was a young man at this time, still quite green in many of the ways of the world. He says of himself:

“So here I was in Rome, with a good wardrobe, a fair amount of money, some jewelry, and a fair amount of experience, with good letters of recommendation, completely free, and at an age when a man can count on the help of fortune if he has a spark of courage and a face with disposes those whom he approaches to look on him with favor. It is not beauty, but something more valuable, which I possessed but which I cannot define. I felt that I was capable of anything. I knew that Rome was the one city in which a man who set out from nothing had often risen very high; and it is not surprising that I believed I possessed all the qualities needed to rise; my capital was an unbridled self-esteem which inexperience prevented me from mistrusting.”

In subsequent posts we’ll see who else he meets and the sites he visits in Rome.

(All quotes in this post taken from History of My Life by Giacomo Casanova, translated by Willard R. Trask, Volume 1, Chapter 9.)