Casanova in Place: The Burchiello Tour

Okay, so I’ve told you about the scholarly days at the Casanova in Place Symposium, but that’s not all we did! The event included optional excursions before and after the weekend events. On Thursday, June 27, some of us took a tour on the Burchiello boat.

Why, you may ask? Because Casanova had a singular experience on the Burchiello himself. Here’s how I described it in my book: “As Casanova, his mother, Baffo, and the Abate Grimani took the burchiello, a large boat, to Padua, the ten-year-old Casanova awoke to see the trees moving outside his window. When he asked his mother why the trees were “walking,” she scolded him for his stupidity, as did Grimani when he entered the room and heard this conversation. But Baffo did not. He asked Casanova why he said this, and Casanova replied, “Then it is possible … that the sun does not move either, and that it is we who turn from West to East.” Baffo praised the boy and discussed planetary motions with him then. “But for Signor Baffo,” writes Casanova, “that moment would have been enough to corrupt my intelligence.” Baffo provided encouragement just when Casanova was in need of it.”

So you can surmise that the Burchiello was a large boat, big enough for people to sleep on. Venetian nobles often took it up the Brenta Canal on the mainland where they would stay for the summer in their palatial villas, away from the malarial lagoon. 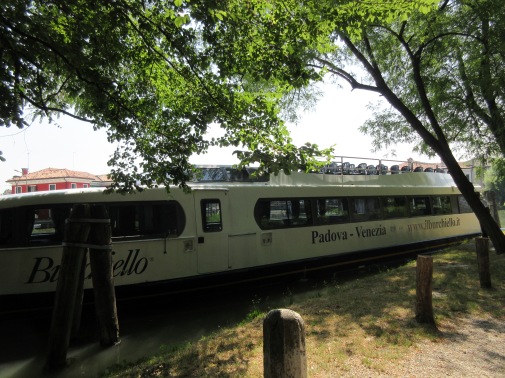 Our Burchiello awaited us outside the villa

Of course, the Burchiello we took was not the historic one of yore but a modern vessel thankfully equipped with air conditioning, for it was 103 F outside that day. Our guide Paola provided excellent commentary, describing the many villas we passed as well as the locks and bridges; we were fascinated by the many ways that the bridges along the canal raised, spun to the side, were cranked by hand, or otherwise got out of our way so we could pass. 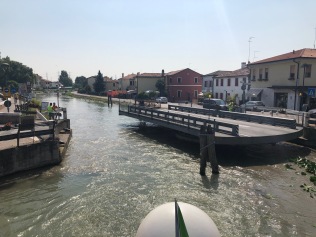 One of the many swinging bridges 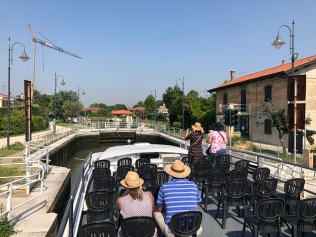 One of the many swinging bridges

We stopped to visit three of the villas that are not always open to general visitors but are one of the benefits of taking this tour. First stop was in Malcontenta at the Villa Foscari by Andrea Palladio, with its enormous columns and frescoes of giants. It was built by brothers who essentially divided it in half. We next stopped in Mira at the 18th century Villa Widmann, which had rooms overlooking a central room, all decorated with colorful frescoes on every surface. The carriage house was indeed full of carriages, fascinating to see examples of the many ways Casanova traveled across Europe. 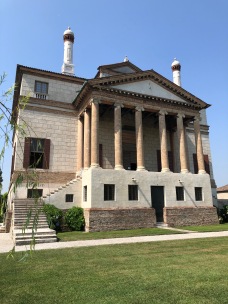 The Villa Foscari as seen from the waterside 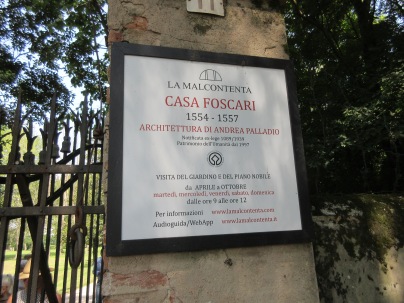 It’s one of Palladio’s gems; alas, no photos allowed inside 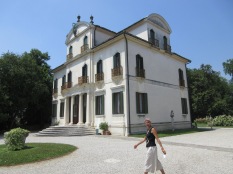 Villa Widmann with our guide out front 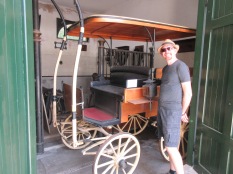 One carriage from the collection 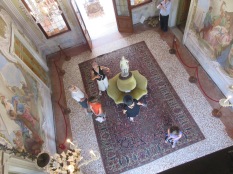 View of the central room of Villa Widmann 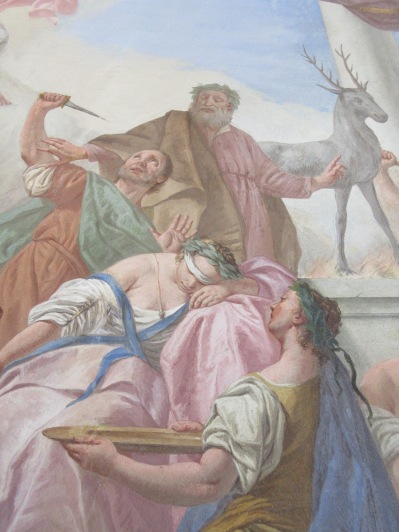 Lovely airy frescoes at the Widmann

The final villa was in Stra at the Villa Pisani, an enormous building on enormous grounds with a reflecting pool and outbuildings designed to make the garden look even larger. The upstairs ballroom had windows facing courtyards that held other frescoes to reflect back into the ballroom, again amplifying its size and grandeur. It also had one of the first indoor built in baths and a room with a bed Napoleon had slept in. (I blogged about this villa once before for its role in the life of Evelina van Milligen Pisani.) The boat continued all the way to Padua, where we disembarked and found a bus back to Venice. 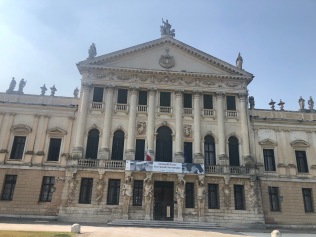 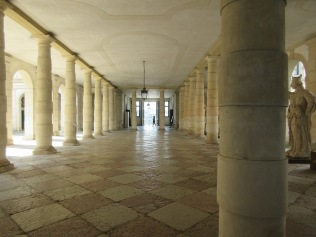 The passageway from entrance to rear gardens 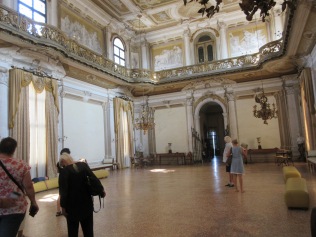 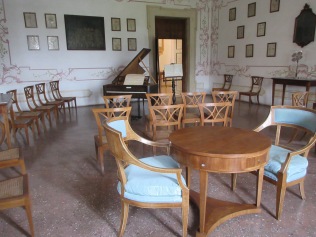 A chamber for, what else? chamber music 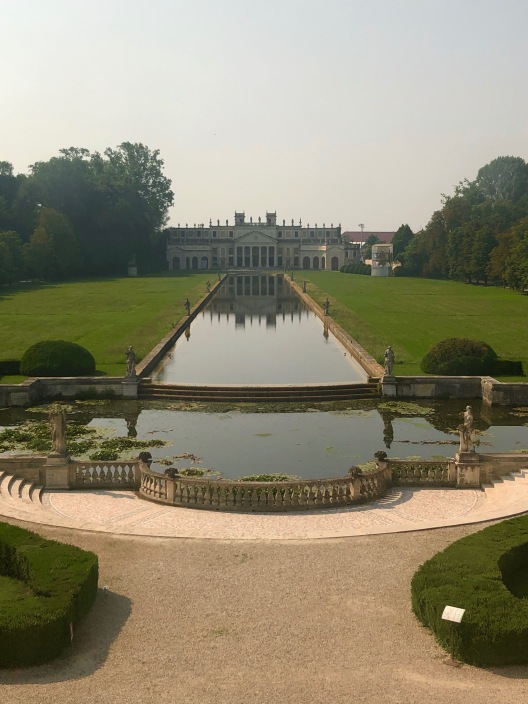 Gardens at the rear of the villa stretch onwards

But despite these wondrous villas, the best part of the day was meeting Casanova enthusiasts who joined us on the tour. Besides my partner RJ, we were joined by Valerie from New York and Valeriano from the Madrid area. We talked of teaching, lawyering, families, history, and of course Casanova. We sat amazed at lunchtime when the dishes kept arriving with cheese, pasta, salad, fish, vegetables, dessert, coffee. We even felt comfortable enough sharing choice bites from our plates. Valerie was a teacher and is an author, so we had much in common. By the end of the day both she and Valeriano felt like family, simpatico at the heart level. What a lovely start to the days that were to come! 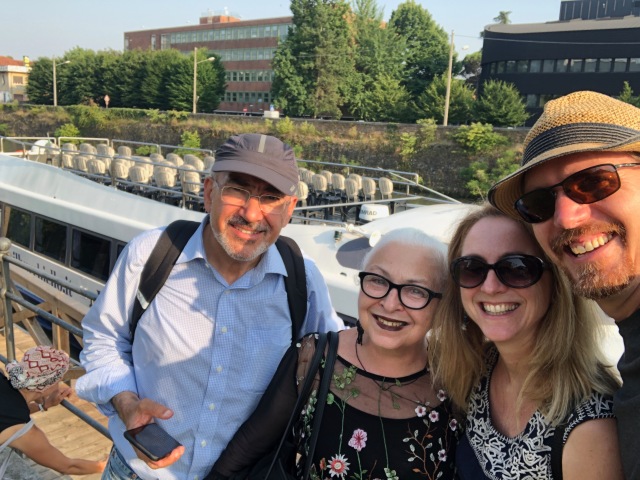 Valeriano, Valerie, myself and RJ as we reached Padua

(Photos by Valeriano, myself, and RJ, except the final one by Paola.)

2 Responses to Casanova in Place: The Burchiello Tour