Though Casanova is most often known as a great lover, he was a serious scholar, writer, and mathematician. In his History of My Life, he mentions his desire to study in Rome; Casanova specifically names the Collegio Romano, the Minerva, and the Vatican Libraries.

I’ve mentioned in other posts that Casanova befriended the Prince of Santa Croce and his wife, the Princess, who was often visited by Cardinal de Bernis. “The Prince was a handsome man,” Casanova writes, “elegant in his manners and with a sufficiency of intelligence; but he used it only in commercial speculations” (12.1.4). After a few weeks of acquaintance, when the Prince had heard Casanova complain of not having access to the Roman libraries, he paved the way for Casanova to gain entry; C writes that the Prince “offered to introduce me to the Superior of the professed house at Il Gesù and at Sant’Iganzio” (12.1.5).

Casanova writes that the Prince’s introduction led to complete access:

“One of the librarians presented me once and for all to all the assistants, and from then on I found I could not only go to the library on any day and at any hour but could also take home whatever books I needed, only writing the title of the book on a sheet of paper which I left on the table at which I was writing. I was brought candles when it appeared that I did not have light enough, and the courtesy I was shown even extended to my being given the key to a small door by which I could enter the library at all hours, very often without being seen.”

It’s a bit unclear which library he refers to in this passage. And what sort of secret library things was Casanova doing that he needed access at all hours and a private door? Unfortunately he doesn’t disclose this but leaves us to wonder…. J. Rives Childs writes on page 253 of Casanova: A New Perspective that C refers to the library of the Jesuits, which would be the Collegio Romano. 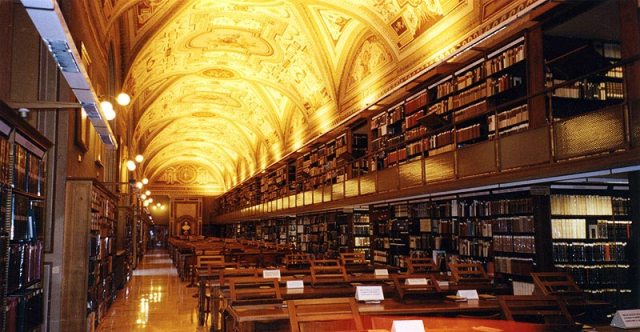 The Vatican library is one of the world’s oldest libraries, officially established in 1475. But around 1587, Domenico Fontana designed the building that continues to house the library today. Located within the Vatican Palace, access to the library is through the Belvedere Courtyard. Perhaps this is the special door that C had access to? The library had many restrictions, including chaining books to special storage benches, and heavy constraints were put in place by Pope Clement XIII in the 1760s; this helps to explain why Casanova would make a point of telling readers about his special privileges.

The Library of the Collegio Romano was connected to two churches, Il Gesù and Sant’Ignazio, as Casanova mentions. The Collegio could accommodate over 2,000 students. The library was overseen by Jesuits, explaining why Casanova needed the Prince’s introduction to the church Superior. It is located on what is now the Piazza del Collegio Romano in the Pigna district of Rome. 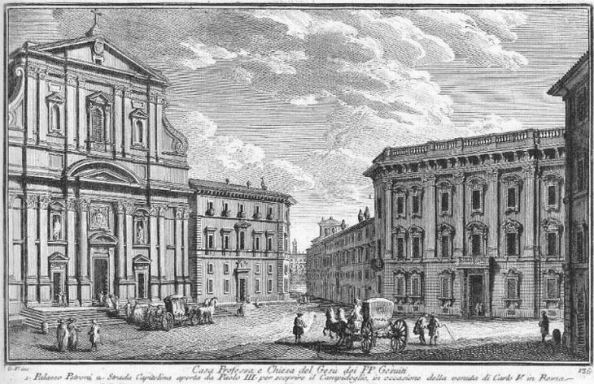 Vasi’s etching includes the Church of Il Gesù, on the left. 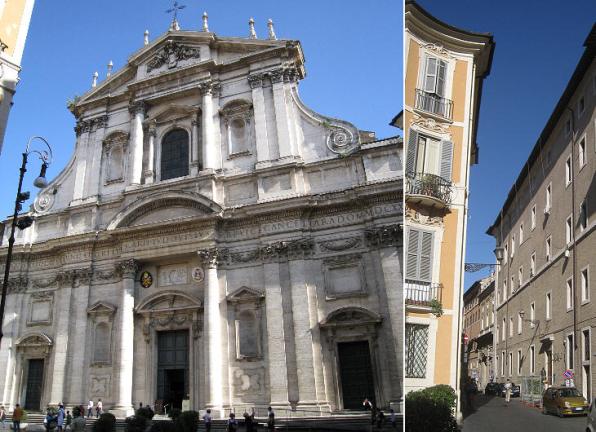 Like the Collegio Romano, the Biblioteca alla Minerva was connected to a church, that of Santa Maria sopra Minerva, on the Piazza della Minerva, on the block behind the Pantheon. It was also known as the Biblioteca Casanatense. Originally designated as a theological school for Dominican monks, in the late 1500s many of the convent rooms were redesigned and new buildings added to create the College of St. Thomas. This must be the site where Casanova went to study or read. 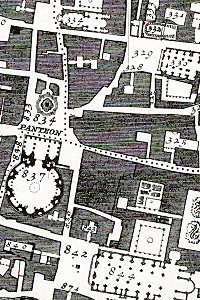 Detail from the 1748 map by Giambattista Nolli, showing the Minerva at 842.

(Nolli map from https://en.wikipedia.org/wiki/Giambattista_Nolli. Quotes from Casanova’s History of My Life, translated by Willard Trask, come from Vol. 12, Ch. 1. Images of Il Gesù and Sant’Ignazio from Roberto Piperno at romeartlover.it. Information on the Minerva and Vatican Library come from Wikipedia. Vatican photo from http://idlespeculations-terryprest.blogspot.com/2010/11/vatican-and-importance-of-thought.html.)