Proud Owner of a Casanova

Posted on September 1, 2020 by seductivevenice

“Casanova,” besides referring to any random womanizer, generally refers to Giacomo Casanova, the adventurer and writer. Some art lovers and historians know about his brother Francesco, a painter known best for his battle scenes.

But they also had another brother: Giovanni.

I wrote about Giovanni previously to show the engraving that my friend Marco used to own. And now I am the proud owner of a Giovanni Casanova engraving as well! 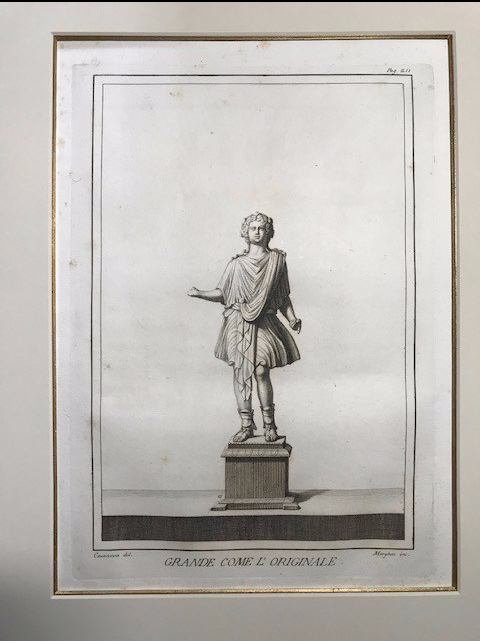 The text translates to “As big as the original.”

My generous and wonderful friend Valeriano in Spain saw that a Giovanni Casanova engraving was up for auction earlier this year. He shared the link with me and then surprised me by asking if he could buy it for me as a gift! I generally don’t buy art like this and don’t own anything similar (except the piece that Valeriano bought for me in Venice last year when we were at the Casanova in Place Symposium!).

It took some special packaging and a couple trips to the post office, but the piece finally arrived to me safely. It’s a page taken from a book, as evidenced by the page number in the corner. It also has stitching holes along one side (hidden here by the mat, but we did not cut or alter the paper in any way).

My friend Heather, a professional framer, made a custom mat for the page. She actually hand-gilded the inner edge in order to bring out the golds in the drawing. There is also foxing, says Heather, a type of age-related damage to the paper; again, we did not want to alter it in any way, though at some future date I may try to clean it or have it cleaned. Valeriano described the paper as papel verjurado or papier vergé. It’s certainly something of high quality from the 18th century. Now I need to find a worthy frame.

Is this an engraving of a famous sculpture? I know that artists often practice their craft by drawing famous sculptures, so perhaps that was Giovanni’s inspiration. Does anyone recognize the original?

A nice detail of the gilt mat and the textures of the page.

Valeriano says that the previous owner, an art teacher, had this engraving as part of a family collection, the only Casanova piece she owned. Many other pieces in the collection came from either Stuttgart or Florence, so it may have come from one of those cities.

4 Responses to Proud Owner of a Casanova