After seeing the recent exhibit “Casanova: The Seduction of Europe,” and visiting Marco Leeflang, we got to wondering where are the portraits of Casanova? They were not displayed at the exhibit. Marco knew that Giuseppe Bignami owned one, but where were the others?

I’ve been reading the catalogue from the exhibit and discovered the answers to most of my questions between those pages: three of these four portraits are featured in the book, with their present location. Here they are, though it will take a few flights for you to get around to visit Casanova in his present homes.

This first one is Giacomo Casanova by Francesco Narice (Italian, about 1722-1785), painted c. 1767-70. Oil on canvas, 152 x 130 cm. In the Collezione Bignami, Genoa. This portrait is disputed; not everyone agrees that it is indeed Casanova depicted here, so Marco tells me, though the exhibit catalogue says that this is the “one with the strongest claims.”

Next is a portrait of Giacomo Casanova from the frontispiece of Icosameron. Engraving by Jan Berka (Czech, 1759-1838). Prague, 1787. General Collection, Beinecke Rare Book and Manuscript Library, Yale University, Hfd35 57x. Icosameron is an odd book by Casanova about a fantastical land where people are both male and female. I’ve blogged about it previously if you want more details. C is 62 in this portrait. 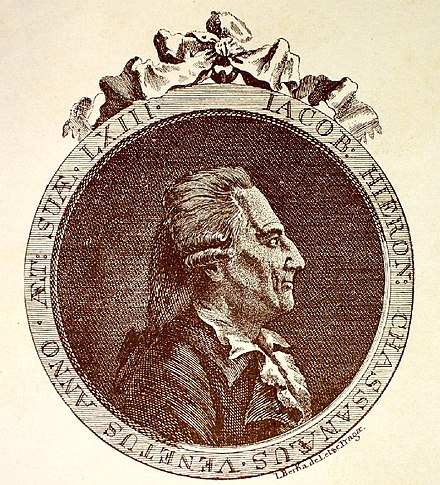 Then there’s this portrait, Giacomo Casanova, by Francesco Casanova, his brother (Italian, 1727-1803). Drawn around 1751. Red chalk on paper, 20 x 15 cm. Located at the State Historical Museum, Moscow. Marco told me that in 1751 Francesco and Giacomo did not see each other, so Francesco would have done this from memory, so there remains a little question about the authenticity of the likeness.

But that leaves this final portrait, which is not listed in the exhibit catalogue. It’s by Alessandro Longhi (Italian, June 12, 1733-November 1813). It’s listed on Wikimedia Commons as an alleged portrait of Casanova probably from 1774, so it sounds like this likeness is disputed as well. It also says that it may live in either the Gritti Collection or Florence, and all we get to see here is a black and white reproduction from the 1930s. Why isn’t it on display? If it’s in the Gritti in Venice, then that’s only steps away from where Casanova was born and baptized. You’d think they’d put this portrait out to be seen! Do any of you out there have some connection to the Gritti that you can ask these questions?

Apparently there was a miniature of C in profile at age 30, by an unknown artist and now lost. And that’s it! Not much to go on. It sounds like the most accurate and least disputed overall is the Icosameron frontispiece by Berka, of C in his later years past his prime. I bet he loses some sleep over this.